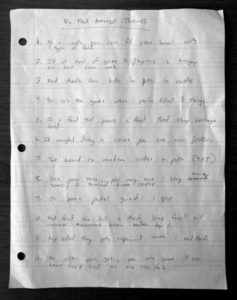 Over the years, I have cobbled together a few game design exercises that I thought I’d share with you…

This next design exercise I’ll call Collaboration for lack of a better name. I found my first time playing it here way back in 2007.

It is one that has always pretty amazing results. Participants each contribute to a set of game rules, then play the game to completion with a winner. It sounds like it would be difficult to get a fully functioning game out of a group-think activity, but I have yet to see a session not result in a game. That said, there is no guarantee that the game will be fun or have strategy or even lack broken mechanics.

Now is the time to justify having all of those game bits you’ve been saving over the years. Take them out and set them in the middle of the table for all to see and browse. The more variety the better. Having a random game board like checkers might be useful as well.  Next get some paper (lined works best) and a pen and you’re ready to start.

This exercise works best with two to four designers, though it can work with more.

Designate one person to be the rules writer. That person will number the sheet of paper from 1 to 16, leaving some space between each.

To begin, the rules writer declares a simple arbitrary rule. For example…

The player with the most sheep is the winner.

After the rules writer writes that rule down as #1, the next designer declares his rule. For example…

Board spaces are limited to three items.

Now apparently we have a board… with spaces. What are the items we can place on the board? We don’t know yet. Maybe it’s the sheep, maybe it’s something else.

This continues on like this until about half of the rules are written (with four designers, twice around).  For this first half, the rules don’t have to relate to each other. In fact, it is encouraged that they don’t. But the number one rule is that you are free to declare whatever you want. No one gets to shoot down an idea.

About halfway through the rules, the activity continues on but shifts in its goal. Now, each designer must focus on tying loose ends together. The rules writer reads the existing rules as a reminder of the current state of the design. If a concept or component was brought up, try to connect it with existing rules. If there are missing core game rules, like ending condition, add those. For example…

On your turn, you may move one sheep to an adjacent square. If the sheep is at the edge of the board, you may instead move it off to capture it.

This rule ties together the first two. We now know what the board is for and how the space limit comes into play. We now know how to collect sheep to win the game. Yes, it does add a new thread that needs explanation (how to place the sheep get on the board), but overall, it is steering the rules toward completion.

Once you have all your rules, you are almost done. Sometimes it might be necessary to add a few more rules to fill in some gaping holes. Don’t worry about handling every little edge case – there is some wiggle room here when you actually play the game.

Now it’s time to play! The rules writer will now read the rules to the game aloud to all of the designers. While this is happening, the other designers prepare the game pieces that are needed by the game.

“We never said how many sheep were in the supply, so let’s just say there’s 20 because that’s all the white cubes we have”

The winner of the game gets the honor of naming the monstrosity that you have created!

This exercise is a collaborative effort.  You may have a vision of how you want things to turn out, but that gets diverted with each rule the other designers add. The result might not be something that you yourself would have pursued.

This experience gives you the chance to make a game for fun. The result is disposable. There is no burden of further development or pursuit of publication. You made a game that will probably only be ever played once. This freedom allows you to take chances.

Sometimes we have crazy ideas that ends up slipping into our currently active designs if only because of convenience. This activity gives you to have an outlet to tinker with random mechanics. Some ideas may have merit and you might save them for a future game. Sometimes, the rule combine to let emergent gameplay shine through, enough so that you’ll want to make a note for later.  Most of the the time, though, you’ll just have a quirky amalgam whose only merit is that it let you have a good time creating something with your friends.